I dreamed a little dream of an Oregon Pinot Noir… and it tasted JUST like the ’09 Reserve from Patty Green!   This here is a truly exceptional expression of Willamette Valley at a can’t-be-beat cost.  I love this winery.  Where else would you see a shirt like this?

It says Women Taste Better for the “I can’t find my glasses!” crowd.  I actually own one of these t-shirts, as I was extremely fortunate to be able to attend a wine dinner last year with co-owner and winemaker at Patricia Green Cellars, Jim Anderson.  I won’t brag about all the wines I had, but I did get to try the last vintage of their Chardonnay AND a special little late harvest Muscat that they only make a tiny bit of.  And let’s just say- everything they make at Patricia Green, they make well! 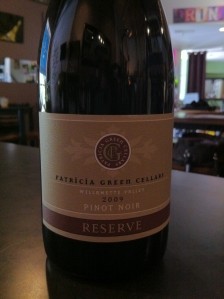 The 2009 Reserve of which I write has yet to receive an “official” rating from Wine Spectator or the Wine Advocate, but if you look at the last several vintages, there is barely a rating below 90 points for the last couple years.  Many of their single vineyard selections are built to last (I sampled an ’04 at the dinner that was still a giant), but this ’09 Reserve is absolutely perfect as a young’in!  Basically the idea behind the Reserve bottling is- in simple terms- they take a bunch of wine from all the different single vineyards, put ’em together, wave their magic wand and POOF!  it is born.

Okay, maybe not JUST like that.  But yes, the ’09 Reserve is made up of fruit from all the single vineyards (Ana, Croft, Four Winds, etc).  The juice that ends up in the Reserve isn’t of poor quality, before you leap to that conclusion.  No, they don’t just take the schwag juice and throw it in a bottle to sell.  They take tremendous care with all their fruit, and in particular they make sure that each vineyards specific qualities are expressed to their best potential.  So let’s say Vineyard A typically produces smokier fruit, just as an example.  If there’s a portion of Vineyard A that isn’t quite as smoky, WHOOSH- off it goes to be bottled under the Reserve label.  Kapiche?  Hopefully that makes sense.

But enough about that, let’s hear about how it tastes!  Oh, darn… would you look at that… my glass seems to have been emptied since I started writing!  Funny how that happens.  I’ll need to top myself off, since I wouldn’t want to forget how it tastes….

Now, where was I?  Right.  Ripe, plentiful fruit greets you at the nose- cherries- both sour and black,  plums, and a pleasant hint of red fruit snacks (red fruit snacks can really be any one of a number of fruits).  After this wine introduces herself to you with the fruit content, her second act consists of notes of spice  box, cedar, savory herbs, and a little rose petal.  An  acidic backbone rounds it out and gives it a nice lift.  You almost want to smack your lips after you take a sip, it is so pleasant.  This would go so perfectly with so many foods, it makes my mind race… DUCK!  duckduckduck.  With any kind of fruit-based sauce like a cherry-balsamic glaze, or an herb bordelaise.  Topped with GOAT CHEESE!  Duck and goat cheese together are sublime.  If not Duck, easily Salmon.  Two of the most versatile species to prepare.

Currently we’re pouring this gem of a wine at ALL THREE of our restaurants!  That would be Cellar on Greene, Mr. Friendly’s, and Solstice Kitchen & Wine Bar.  See my links/shoutouts page if you so desire.  You can also purchase a bottle to take home from us at Cellar for $27!  email us at cellarongreene@gmail.com if you’d like to order some!  Chances are it will be open for tasting at the Wine Sale next Saturday (February 5th from 12-2) as well.  Now, if that doesn’t give you many opportunities to taste and/or buy it, I don’t know what does.  Please stop in for a glass, we’d love to have you try it!  Hope everyone’s enjoying this 60+ degree day!

I’m really not one for New Years resolutions.  But I’m always happy to lend a hand for those of you who make them!  And I’ll offer my support in any area, really- but if you should happen to desire to DRINK MORE in 2011 (or even just learn more about wine), I can certainly offer my services!  So I’m starting 2011 off with one of my favorite wines of 2010.  I had fully intended to have this be a end-of-the-year post, but life gets a little too intense in the last two weeks of December, as I’m sure you know.

But now we get to breathe and relax!  And take some time with a good bottle of wine again!  So allow me to reiterate:  I FREAKING LOVE THIS WINE.  I’d like to hail myself as having known the Craggy Range wines were something special when I first tasted them back in early summer.  As anyone who is in the restaurant business knows, we taste a lot of wines with different distributors over the course of any given week- and let’s be honest- not all of them are mind-blowing.  I am almost always polite when I taste wine, but a lot of times am forced to do the smile and nod.  Smile and nod. 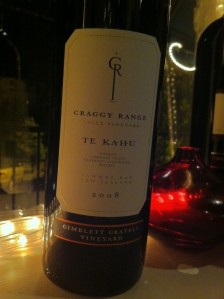 I have a clear memory of the first time I tasted you, Te Kahu: I of course, was only half-listening to the schpiel about what I was tasting (true confession, sometimes I only half-listen until I realize it’s worth listening TO) and I assumed you were a Pinot Noir at first- why?  because I don’t think I’d ever had a red wine from New Zealand that wasn’t Pinot Noir.  True story.  As soon as I smelled you, I knew I loved you.  But no, no.  You are definitely not Pinot Noir.

Rich and intense on the nose, it offers deep blackberry, exotic notes of sandalwood and incense, bay leaves, black olive and cinnamon.  There’s a nice salinity to this wine as well, that make it a really nice match for food.  Red meat is kind of a given, as Te Kahu’s tannin really calls for something to match it’s intensity.  However, it manages to strike a nice balance between a big red that you can sip on solo AND a big red that you can eat with a steak.  Hints of chocolate, tobacco and an untamed, wild and savory sort of personality round this bad boy out. 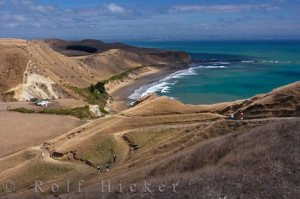 FYI- I would die to go to New Zealand...

I sold a case of this wine, bottle by bottle, BEFORE it’s cool little 92-point rating from Robert Parker came out!  AND before your sister wine, the 2008 Te Muna Road Pinot Noir, was named one of the Top 100 Wines of the Year by Wine Spectator!  AND before Wine Enthusiast gave Craggy Range a 2010 Wine Star award for New World Winery of the year!  I knew you were a winner, Te Kahu!  And the more exciting part was that everyone I sold it to loved it.  You might think, a case?  that’s not really that much.  Well, it is when you’re a small wine shop.  And it is when you consider that we sell mostly $15 and under bottles of wine, and Te Kahu’s price at the time was $28.  We have a little over a case left right now, and we’re selling it for $24!  And yes, it’s the same wine.  We didn’t take a glass out and then seal it back up.  It’s the SAME.  But like every other kind of store on earth, sometimes we’re offered more competative pricing, and we, in turn, like to pass it on to YOU!

As if that weren’t enough, we’re also pouring the Craggy Range Kidnapper’s Vineyard Chardonnay, 2008 by the glass right now at Cellar- which is a pretty kick-ass little Chard- and she is no slouch compared to her big brother, as she earned herself a nice little 92-point rating from Wine Spectator!  Come  give her a taste next time you’re on Greene Street!  She is mostly stainless steel with a little oak- lean and elegant, yet flirty with notes of apricot, almond and pear.  YUM.  Craggy Range makes about a million other wines that I’m dying to get my hands on, too.  Be sure to check out their website.  Beautiful stuff.