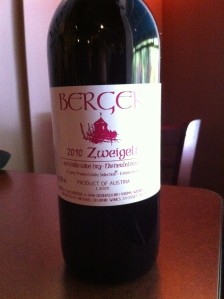 Heh?  Zwei-what??  ZweiGELT!  here’s the best phonetic pronunciation guide I could invent- “Tsvye-gelt.”  But I promise not to make fun of you if you say “Zwy-gelt”.  Or you could get straight to the point and just say “gimmee the weird red with the bottle top!”

So what the heck IS Zweigelt?  Well, it’s Austrian for one.  It is, as I like to call them, a wine baby-  It was created as a cross between Blaufrankisch and St. Laurent (HA!  like those are ANY easier to remember!  way to go, Austria!).  I kid Austria.  I love Austrian wine!  Anyway, Zweigelt is Austria’s most planted red varietal.  It was created in 1922 by Dr. Friedrich Zweigelt.  I swear it’s true- I couldn’t make this up if I tried.  That just seems like something you would say because you actually had no idea who made it- an Austrian grape called Zweigelt?  Sure!  A dude named Friedrich invented it!  And people would believe you, because they all saw The Sound of Music and there was a kid named Friedrich, and HE was Austrian.  Can’t you just picture these two drinking Zweigelt?

So rugged and sexy.  Kind of like this wine.  Overall, it is a light-bodied wine, but it’s very sturdy, which is what makes me say it’s rugged.  If you’re searching for a point of reference for this one (ie something familiar to compare it to), I’d liken it to a Pinot Noir, at least in body and appearance.  Visually, and on first whiff, it is deceptively big-seeming- dark colored, and with a spicy, peppery nose and additional aromas of dark fruits- blackberries, plums, and pomegranate.  But once you taste it, the 12.5% alcohol content is obvious- its light, buoyant, and tart mouthfeel and high acidity is just plain lip-smacking!

Now that Fall is officially here, there is no time like the present to try this wine!  It’s really a perfect match for fall foods- roasted root veggies will pick up it’s earthy tones.  Anything with mushrooms will be winning.  And I personally think it beckons for cheese- any kind of sharp, pungent cheese.  Which is also an ideal match if you happen to make this a 3:30 wine (more about that here)- which is a perfectly logical idea, considering that it’s low in alcohol.  So what if it’s a 1 liter bottle?

But back to Dr. Friedrich Zweigelt for a minute.  I’ve decided (after accidentally drinking a full glass of this wine while typing) that he is like a  WW1- era Colonel William Stryker-meets-wine:  “In creating this cultivar, Fritz Zweigelt was looking for prolific grape-bearing, good deep colour, and resistance to disease. And Zweigelt is indeed  resistant to frost, drought, and to various ailments of the vine, but by crossing Blauf with SL, Dr Z came up with a grape that tastes like neither” (source).

Granted, Fritz here doesn’t have a secret desire to destroy all grapes the way Stryker wanted to destroy all mutants.  But let’s still liken the Berger Zweigelt to Wolverine.  Just for fun.  Okay, just so I can google some pictures of him.

Amazing how we’ve gone from Captain Von Trapp to Colonel Stryker and Wolverine in the span of one blog entry that is supposed to be about wine.  And we have this quiet overcast day and a bottle of Berger Zweigelt to thank!  So thank you, Berger.  I applaud you.  I applaud your versatility, uniqueness and coolness.  Thank you for starting my Saturday so beautifully.

Okay, I had best shut up now or who knows where we will end up next.  Try the Berger by-the-glass at Cellar on Greene, or take a bottle home for $14!  Happy weekend everyone!