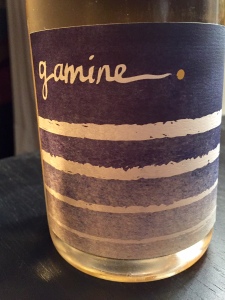 This little doll is about as charming as they come. I’ve written about Division Wine Co. before, but this wine fresh from winemaker Kate Norris’ personal project, Gamine Wines. Gamine means a girl with a mischievous charm. As a lover of words in general, I’m a fan of this one.  This is an enchanting wine, starting with the fact that its made from Grenache: Grenache from Southern Oregon’s Applegate Valley. Grenache is a grape I don’t typically associate with sparkling wine. There’s nothing specific that makes it wrong for sparkling (to me), but especially in a hot climate like Southern Oregon, it has the potential to turn into a hulking monster of a red wine. Alcohol contents can get super high in Grenache in general, which is what makes this wine such an altogether pleasant surprise! 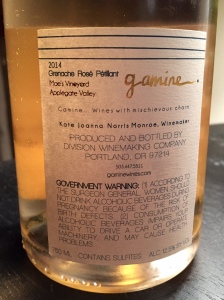 Delicate, girly, coy… and yes, a little mischievous. Pale pink, with a faint and fine bead. The nose is subtle at first, but becomes a bit more revealing after a few minutes.

Strawberry, cherry pit, fragrant herbs & cantaloupe, leaving you with a fun zesty tingle on the tongue. Given its Pet Nat status, the sparkle that’s found here is a light one, but it doesn’t deflate and leave you wanting more- it maintains it’s fine effervescence. Actually, this wine also drinks well on day two! I opened it last night and kept it overnight with a bubble-topper, and its still razor-sharp. The actual bubbles are no longer with us, but at this point it drinks like  a light, clean, tart rosé. Which is never a bad thing.

Pet Nat sparkling has often been described as “rustic”, and with due reason- but in this case, while there is a touch of that little funk, its a very refined wine. It is sophisticated and ultra-feminine. Normally I resist the use of gender assignment when it comes to wine (because 2015), but this wine just speaks femininity to me. In all forms, not just the light, flirty, girly side of femininity- the general badass side, too. Like this: 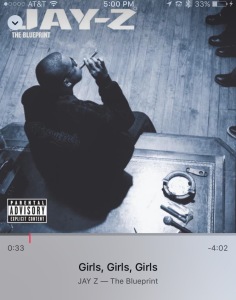 Her walk is mean, yo.

This wine will cost you a ridiculous $26. There’s no ‘this was a sample’ disclosure here. I crushed hard on this wine and bought a couple, along with the Gamine Syrah, which is likewise ridiculously good. That wine is so good, actually, that I don’t even want to tell you about it because I’m concerned it will sell out and I won’t get to have any more. I believe the PetNat was only about 70 cases made, so that too is something  you’re gonna want to get your paws on rather soon, IMO. I think this wine is a really fantastic step for Oregon sparkling in general. A year ago if you would have told me there was a PetNat Grenache Rosé coming out of Southern Oregon, I might’ve looked at you CRAYzy.

One last side note- I love these labels! And to no one’s surprise, the talented Maija Rebecca did the watercolors for the Gamine wines. Love. Her.

I love this wine. It reminds me of pale pink lipstick, parasols, dimples, muddy pink rain boots, a sunny field of lavender, beachy hair waves, and Queen Anne’s lace. How’s that for free-association?

December is here! Naturally, the best time of the year to drink sparkling wine. Well, except February. That’s a good month, too- with that whole holiday that starts with a “V” occurring and all. Personally, I’ll drink sparkling just about any old month, but the craving has really come home to roost in the last few weeks. I think it really began when I was working on this article, and pouring over the Theise Sparkling Manifesto, and realizing just how painfully long it had been since I’d felt that searing acid slice across my tastebuds and the tingle of carbonation. I love the mouthwatering factor of sparkling wine more than anything. I especially love how just thinking about it makes my mouth water. Like now. 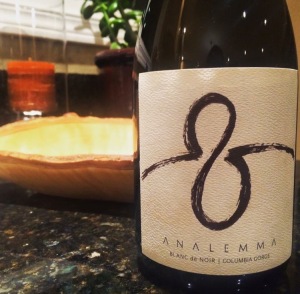 I stole this picture from fellow writer, Tamara Belgard! It was better than mine.

But, hallelujah! There was a saving grace. The weekend of November 14th, I took a quick jaunt up to the Columbia Gorge to attend a release party for Analemma’s 2011 Atavus Blanc de Noir. Perfect! I thought. I’m unfamiliar with the Gorge area in general, still being a relative newbie, and I’ll treat it like a little vacation that’s only a day and a half long. Sold.

So what better time than December to throw together a little “Sparkling Month” on the blog? Admittedly, thus far I have slated only four Sparklers to tell you about- but they’re good ones, and they’re all very individual representations of Sparkling wine in the Pacific Northwest, and the cool directions its going in. 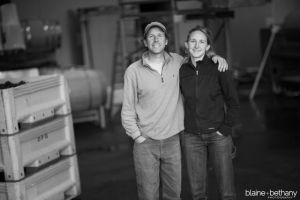 Where to start with the Analemma? There are so many cool facts about this wine. And, I have to lead by saying I was so pleasantly surprised and impressed by my experience there. Kris and Stephen are wonderfully authentic and talented people. A husband and wife team, Kris being the viticulturalist and Stephen the winemaker, they’ve really created a very special place at Analemma Wines. With some impressive notches on their belts, they had the opportunity to lease the Atavus Vineyard in the Columbia Gorge starting in 2010. The vineyard itself was planted in the 1960’s. A very high-elevation site, it sits at between 1600 and 1800 feet, making it absolutely ideal for grapes that thrive in cooler growing conditions. The resulting high acid spells perfection for sparkling grapes. 2011 was especially cold, so this wine was brought into the world at the right time. Three of the coolest things about this bubbly are: it is single varietal (Pinot Noir), single vineyard (Atavus) and single vintage (2011). Got all that? 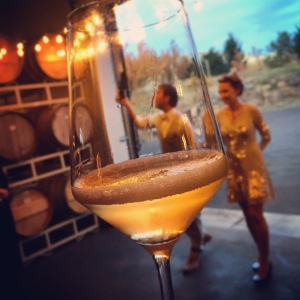 A sharp crispness dominates the palate, with really poignant aromas of granny smith apple, underripe red fruit, lemon peel, and a hint of sweet tarts. There are some beautifully woven baking spice notes in the background, accentuated by woodsy herbs and that salinity we all know and love in sparkling wine. Here’s the interesting thing about my experience tasting this wine for the first time. As soon as I tasted it, I thought… “Oh, wow. I *think* this is amazing,” but I didn’t have a chance to really bounce my thoughts off anyone at the time. I had read good press about the wine, so I knew it was well-respected, but sometimes when I first think something is too good initially, I like to test the waters and see if my thoughts fall in line with other people’s. Taste can easily be affected by your mood, your surroundings, etc. At least for me.

In any case, I didn’t trust myself 100%. But, as it turns out, I should have. One of my go-to Pacific Northwest palate’s is Michael Alberty at Storyteller wine in Portland. I love his tasting notes, and have the highest regard for his palate. Just a few days ago he featured this wine in his newsletter, and suffice to say- he likes it. Then I saw that Tamara over at Satiate PDX purchased a bottle at Storyteller just the other night, and she thought it was a rockstar as well. Then there’s the whole Top 100 Wines of 2014 thing, where the 2010 vintage had earned a rightful place. Kiddos, the wine’s good. These people are on to something. 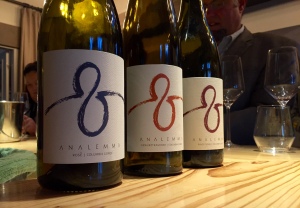 This is already super long, but I do want to make note that I also *loved * their Gewurztraminer. That thing was singin’! They weren’t kidding when they said this vineyard site was intended for Alsatian varietals. I’d love to feature it in the future at some point!

–Absolute. Last. Thing.– Wondering where the name Analemma comes from? Allow me to tell you! I love this. An analemma is a figure eight pattern that the sun creates across the sky during the course of a year. A specific location has a unique analemma- Beaune, France will have a different-looking analemma then Marlborough, New Zealand. Their logo is an artist’s rendering of the analemma at the Atavus vineyard. The top of the figure eight would occur roughly at the time of the Summer solstice. One of my favorite things about wine is that it is, in many ways, a physical representation of where it comes from. The background of the analemma itself and how it relates to the wine is pretty awesome, I think.

I’d love to thank Kris and Stephen for the really amazing, educational, and eye-opening visit. The Gorge AVA is pretty sick, y’all. I’ll be back.