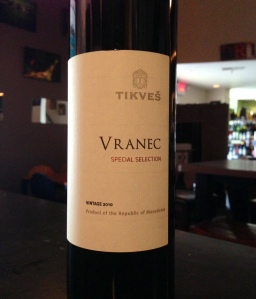 Okay, first things first- what in tarnation is Vranec?  It’s the grape!  And it’s an indigenous Macedonian one.  Vrah-nick is the closest I can reconcile as far as a phonetic pronunciation guide.  And the name of the winery (one of the oldest in Macedonia) is Tikves – Tick-vees.  This wine is imported by Eric Solomon, one of my favorite importers of mostly French and Spanish wines that all focus on a sense of place; he works a lot with indigenous varietals, so it’s no surprise that he has this funky little wine.  It is not listed on their website, so I’m guessing it’s a relatively new acquisition.  It was reviewed by Robert Parker’s The Wine Advocate in June 2012 and given a sweet little 90 point rating!  Which is pretty awesome considering its $12 pricetag! 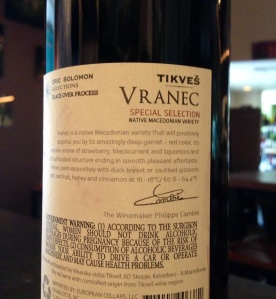 So not a ton of information exists on this grape, or even on Macedonia as a wine region.  According to a bit of Googling, Vranec is a genetic relative of Zinfandel.  It grows vigorously, and produces large grapes that are deeply colored with moderate to high tannin.  The wine is a deep garnet/purpleish color and has a fairly big nose, mostly of dark fruits- prunes, plums and blackcurrant- but with a pleasant briary and spicy structure.  It does indeed reminisce of a Zinfandel, stylistically- but not a stone’s throw from a Zin would be a Primitivo (an Italian cousin of Zin) and to me, it drinks this way.  Perhaps due to the oaking and old-world personality.  But still, enough up-front fruit is present to appeal to the average New-world wine drinker.  It may take a little getting used to, but trust me, this is a profile you’re gonna want to embrace!  Eastern European countries are poised to make a real impact on our wine market, and we should definitely take note.

Also, I admit to needing a refresher on where exactly Macedonia is.  So, here it is:

It is roughly on the same parallel as Southern Italy, so it’s no surprise that there’s good wine to be found here.  I’d like to think of this wine as a true diamond in the rough; it’s accessible, inexpensive, and unique.  And it’s also interesting to note that Macedonia, as a country, has only been a democracy (and its own country) since 1991, but they’ve been making wine for centuries.  Along with several Slovenain wines I’ve tasted, it seems like winemakers from this part of the world don’t make a big fuss about their wines.  Wine is just something they do.  No frills, no fancy marketing or  packaging.  Just good wine.  So as much as ratings can be a double-edged sword, I think it’s great to see this wine earn a good rating and a bit of press.

This wine can be purchased at Cellar on Greene for $12!  It is not currently by the glass, but chances are there will be an open bottle lingering for the rest of the week.. if I have anything to say about it.  Which fortunately for you, I do!