So this is a new thing for me, and I feel like a bit of a celebrity.

In the spirit of full disclosure, this wine was received as a sample from one of my Twitter followers, @wineclubguy, aka Mark Aseltine.  Turns out, upon inspection, that he is a co-founder of Uncorked Ventures, a site that in addition to having several convenient wine club options, offers pretty neat lookin’ wine gift baskets. 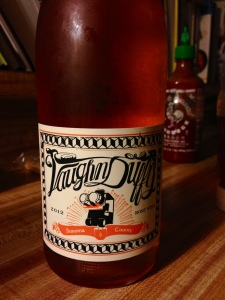 So this is a Rose of 65% Pinot Noir and 35% Syrah from Sonoma County.  I’m fairly certain that @wineclubguy saw one of my many tweets about my love for Rose, and that was how this sample bottle ended up in my life.  Did a little research, and I’m pretty impressed with some of the buzz about this wine.  Evidently not a lot of it makes it out of California (not too surprising given that it’s just 600 cases made). Sarah Vaughn and Matt Duffy were named  on a list of Seven Winemakers to Watch in 2012 by the Insider’s Guide to San Francisco in 2012.  Their 2010 Rose of Pinot was listed as the San Francisco Chronicle’s Top 100 Wines of 2011.  There are also some impressive scores for several of their Pinot Noirs- here is where I got this info- worth checking out.  Could they be the next members of the “new school” of California winemakers?  Matthiasson, Lioco, Arnot-Roberts?  Perhaps.

So a bit more about the wine, as I’m trying to keep this post short n’ sweet; it’s a pretty delicious little quaff, and price-wise ($17 is looking like average retail), it is very decent for a small-production, boutique-y Cali Rose.  I would pay it.  It has a bright nose of freshly grated orange peel, wild strawberry, watermelon and tropical fruit.  Nice acid is combined with a juicy mouthfeel, and a nice thirst quenching, easy-going palate.  They describe it on their website as a porch sipper, and it’s pretty darn hard to argue with that.  Who doesn’t need a porch-sipper?  Or in my case, a couch-sipper?  A Monday night watching Jurassic Park-sipper?  (this movie is fantastic by the way.  don’t even argue with me.)

Truth be told, I’m pretty impressed with the quality of this wine, and I can only assume it is representative of the wines available through Uncorked Ventures (note- this wine was included in their “Explorations” wine club shipment). Since I am super-spoiled and hardly ever have to purchase wine in a retail capacity, I’d say my trust-factor isn’t terribly high on internet wine purchases.  But this might have earned my trust, and in my opinion that’s about 75% of the battle.  Kudos, fellas.

I don’t think I’ll be making the switch to big-time-online-wine-reviewer anytime soon, but this was a fun departure from my norm.