So, I dig half bottles.

Always have, but now that I’m no longer working in a restaurant where I have access to 30 open bottles of wine at all times, I like them even more. I wouldn’t call myself indecisive, but I have always enjoyed options. I’m that person that when I go out to eat, would rather have two (three?) appetizers than one entrée. Don’t bother going out to dinner with me if you’re not a sharer. I’m usually a sharer, but when I’m not I will always be up front about it. “I’m getting THIS and I’m not sharing.” I have uttered those words. It only happens when I’m ordering something I reeeeally like, that I’ve had before, and know in advance that I will have pre-item arrival anxiety if I don’t get enough.

Trips to Vegas and beef carpaccio are flashing before my eyes. Todd English… I love you.

But, moving on from my dining habits, lets talk about drinking habits, and why it’s so fun to incorporate half bottles. And once place in particular that I’ve begun frequenting that has a marvelous selection of half bottles. Feast your eyes: 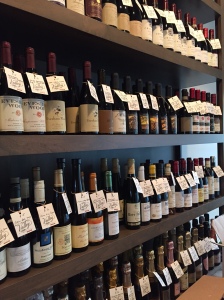 Such excitement over this.

So Valley Wine Merchants is a cool little retail wine shop in Newberg, Oregon where you can find this marvelous wall of 375ml bottles. There are also a few select glass pours available (today there was an Albert Boxler Sylvaner and an 07 Beaux Fréres- WUT?!- among others) and some snacks and such. A very cool spot. It reminds me of my alma mater, Cellar on Greene, except without the restaurant. The owner, Andrew, is very knowledgeable and has been a good resource for me since I landed. He hosted an awesome tasting with Dick Ponzi a few weeks ago where he opened an ’85 and ’86 Ponzi Pinot Noir for a seriously modest cost. Loved it. Props!

So the wine! Domaine André Vatan “Les Charmes” Sancerrre; I bought this because I had a dozen of the freshest Kumumoto oysters ever in my car, and wanted a little something to go with them. These little suckers were amazing. Also, I learned how to shuck an oyster today. A skill I anticipate using quite often now that I live in the Pacific Northwest…

I like trying new things, and this is a new producer to me, but I love Sancerre. Sauvignon Blanc is at its best in the Loire, in my humble opinion. At $16 retail this is definitely a bottle I’d buy again. The nose is a nice combination of gooseberry alongside fresh flowers, lime zest, and a nice smokey edge. Tingly on the tastebuds, and plenty of striking minerality. I get a hint of something spicy in here, too… like almost a chile pepper, but not quite. Plus a little bit of grass and honeysuckle. It has a nice texture; the mouthfeel is soft and elegant. It was really nice with the oysters- I might’ve liked something a bit more saline in this scenario, but overall a pretty nice match. The green hints went really nicely with the mignonette I threw together. What? It’s like 4 ingredients! 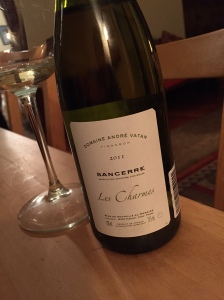 I feel like I’ve crossed over into snobbery, with the oysters and the mignonette and all, but I couldn’t help myself. I mean I kinda wanted the $40-ish bottle of Albert Boxler Pinot Blanc, but I held back! That counts for something.

Here’s another cute half bottle, the EIEIO “Swine Wine” Rie-Chard in Piglet (375ml) form. I love this little bottle…

So I’ve gotten a little wordy here, but the point is- half bottles are a super fun way to get to drink more than one kind of wine in a night. I also use them as an excuse to splurge; I might not want to spend $45 on that 750ml bottle of small-production grower’s Champagne, but somehow $30 on the half bottle feels okay. Why? I don’t really know. That’s another point to make: half-bottles are not “half” as expensive to produce, so don’t harass your wine retailer as to why the half bottle isn’t half as expensive. It’s not really like that. The cork/enclosure, seal, labels, bottle, etc. don’t cost half as much, they cost the same. So you’re really paying for the fun-ness, and that’s your call completely. But you’re not getting ripped off on the price, trust me. Maybe some retailers undercut their margins on halfsies to get them to move, and thats their prerogative. Just don’t be mean to the person selling you your wine, cause that ain’t cool. Just pick someone you like and trust them.

5 thoughts on “André Vatan “Les Charmes” Sancerre, 11 France and an ode to the half bottle…”