Well, not toooo far south, we’re still in Oregon. But today we’re going to the Applegate Valley! This wine is my first trip there. I intend to go back. Both physically and in wine form. Why? 1.) the actual place is only about 4 hours from here, and 2.) the Troon Vineyard Carlton Tasting Room is literally up the street. I went by there on a whim this past Friday and was really glad I did.

So here she is, the Troon Vineyard Estate Zinfandel, 2012 Applegate Valley… 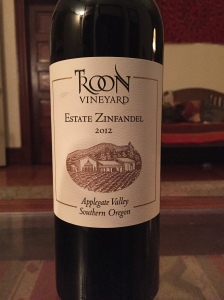 So, given that this part of Oregon is not really all that far from California, I suppose it shouldn’t have come as such a surprise to me that there’s Zin down there. But this little secret hasn’t made it to the East Coast yet, because I had no idea.

The Applegate Valley, as it turns out, is contained entirely within the Rogue Valley AVA. In the same way that the Ribbon Ridge Ava is contained within Chehalem Mountains AVA. Maybe that didn’t require an explanation, but there you have it. It is much hotter there than in the Willamette Valley, the tasting room manager, Meg, was telling me. Last summer, when Willamette was averaging around 90 degrees for a duration, it was 100+ in the Applegate Valley. Which makes it even more sensible that Zin would like to grow there, as Zin loves heat. There is also less rainfall, and I’m pretty sure Zin likes it dry, too.

Allow me to preface these tasting notes by saying that I had somewhat low expectations of this wine. First, because Zin isn’t typically a grape I gravitate towards. And second, because I still don’t have a ton of experience with this part of Oregon. The Umpqua and Rogue Valley wines that reached me in South Carolina never stuck out as favorites. I recall one Gewürztrainer from Brandborg and the Umpqua Valley that I loved, but that’s about it.

So, given my expectations being set low, maybe it was destined that I be impressed with this wine. But lemee tellya- I really like this wine. I actually had to apologize to the tasting room manager, because I felt like my utter surprise could potentially have been construed as having previously thought their wines were crap (again, not true, as that day was my maiden voyage with Troon wines).

So why don’t I love Zin, usually? I dunno. It’s just not my jam. I don’t love high alcohol-fruit bombs, I generally have more of an affinity for white wine in general, there’s so many California Zins that are unbearably average and some that are downright terrible, if we’re being honest. So then along comes this wine and really makes me wonder. Which I love! I love being made to think. So thank you, Troon Zin. And before you get defensive, California, I KNOW there are good ones out there and I DO like them. Heck, every 2012 Turley Zin I had last year blew me away. Just sayin’- I don’t flock to them.

I can walk here! Be jealous. Plus the Carlton Bakery is across the street. Nom.

EGADS, I’m getting wordy again. Lets get to it: this wine has no shortage of ripeness. Raspberry jam, blackberry pie, some leaner rhubarb-y accents, macerated cherries and dried cranberry. It lingers with a nice warmth and pleasant cinnamon, vanilla, clove, a touch of mocha, and a brambly undertone. At 14.4% alcohol, its not flabby in the least.

Its worth noting that this wine just got 88 points from Wine Enthusiast. Props to the tasting room for not flaunting that- I like to reach my own conclusions. I like an 88 point rating, personally. Its solid evidence that a wine is good, but unlike a 90+ rating, you don’t have to see it plastered all over press materials for the next year.

If I was gonna build someone a case of truly unique wine from Oregon, this would be one of ’em.

This concludes Day 4! This wine was purchased at the Troon Carlton Tasting Room in Carlton for $29.