For the last two months, I have been driving by Carlo & Julian almost every day and seeing a sign that said “Closed.” I did start to wonder if they were ever open. This almost added to the intrigue, as it was obvious that its a tiny place. As luck would have it, my roommate happened to drive by on Saturday and noticed the sign said OPEN. We hustled on over, needless to say. Part of me thought by the time we got there it’d be closed.

But it wasn’t! We noticed a high volume of cars, and in turn, people, as we walked in. What a cozy spot. Its almost the epitome of Carlton; a tiny driveway, chickens and cats meandering about, a tasting room filled with pallets of wine that you know doubles as a winemaking facility. No frills, but very inviting and non-fussy. 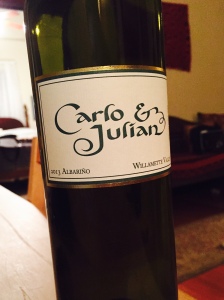 We had actually stumbled into a Tempranillo tasting, we soon found out. The event was probably publicized to the mailing list, but we just got lucky. The owner and winemaker Felix was tasting about 8 different vintages of Tempranillo and two vintages of a blend called Six Grapes. The Tempranillos were wildly fluctuating in character, but all had maintained posterity and reflected the vintage. My favorite wine I had that day was one that was unfortunately sold out- the 2009 Six Grapes. Alas, I had to just enjoy it and then let it go. But I was curious about the Albariño that was listed as available and decided to give it a whirl. I have seen maybe 3-4 other Oregon Albariño around and had been meaning to check one out. 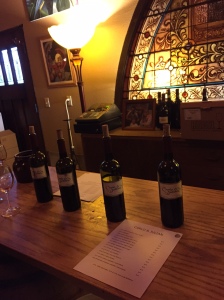 Does it get better than this on a rainy Saturday?

While Felix bottles a lot of Estate fruit, these Albariño grapes come from some nice folks named Ray and Sandra Ethell near Hubbard, OR. I had never heard of Hubbard, so I had to look it up; but it is very close to Woodburn, almost directly east of Carlton. This vineyard contains the first commercial planted Albariño vines in the Willamette Valley, which is sort of a fun fact! So now we can add it to the list of Spanish varietals grown in Oregon.

Always a high acid, super citrusy grape, this is no exception. The nose is all gooseberry, a touch of lees, some light floral accents, and a touch of peach that is almost hidden. In a warmer year like 2012, I can see more tropical fruit probably fleshing out these grapes a bit, but this year is all about the acid. This was such a soggy weekend that this wine makes me dream of a warm Summer evening and some fresh ceviche. Acid-on-acid is a delicate balance, but I think if you threw a sweet fruit salsa in there to marry them, it’d be on time. This wine could also probably cut through something with a higher fat content, or maybe a tangy goat cheese. 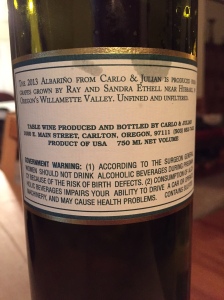 In summation, this is a tasty little wine, but prepare your palate to be wow’d by acid. It is a cool-climate wine, no doubt. The bottle doesn’t state how much of this wine was made, but it probably wasn’t much. Carlo & Julian is having a Malbec tasting in a few weeks and I’ll definitely be there! I recommend a stop. Go for it.

This wine was purchased at the winery for $22. Cheers!