That’s probably the first thing that comes to mind when I think of Ghost Hill Cellars. I visited a few weeks back, and (per usual) it took me a bit longer than I thought it would to get this post together. Until about 20 minutes ago, this was going to be a joint “ode to 2011” post, including this and one other 2011 vintage wine. Unfortunately, the wine gods had other plans, and the other bottle that I purchased is bad. A major bummer, but we’re on the rebound. It happens. I’ll still yammer on for a minute or two about the vintage, because I can’t resist, but we’ll mostly chat about Ghost Hill and this wine.

It was actually back in February that a friend recommended Ghost Hill to me. I believe we tried to go in once, but they were closed (because winter). Embarrassingly, it took me until October to reattempt. That’s the reality of living in wine country; we are overloaded with choices!

In any case, this place is a gem. Its probably one of the most authentically Oregon wineries I’ve visited since I’ve lived here. And it doesn’t hurt that the wines are great.

What do I mean by authentically Oregon? Ghost Hill is a 5th generation family farm. Mike and Drenda Bayliss currently farm the property with their children, Michael and Bernadette and son in law Cameron Bower. About 16 acres of Pinot Noir were planted in 1999 on the 90-acre property. Oats, wheat and other crops take up a lot of Mike’s time as well.

The property sits on Willakenzie soil that is prime for grape-growin’ and is neighbored by famed vineyards Abbott Claim and Bonnie Jean. Rumor has it Ken Wright wanted to swipe this property up before the vineyard was planted. The Bayliss family keeps it pretty low-key, making about 1200 cases a year. Recently they’ve had a whirlwind of activity: Eric Hamacher was hired on as their new winemaker (beginning with the 2015 vintage) and their 2012 Bayliss-Bower received a 94 point score from Wine Spectator’s Insider in the 11/4 edition. Huzzah! 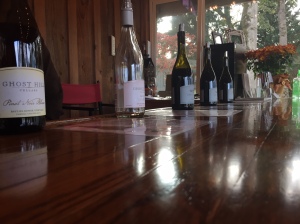 Scores are certainly something to be proud of. Now that I’ve been on the winery side for just about a year, I’ve witnessed what scores can do and its definitely an exciting energy to be a part of. Personally, I’ve been a little weary of 2012 lately, and I will continue to sing the praises of the 2011 vintage until I turn blue in the face. Although, as my favorite coworker likes to remind me “I am not the market,” my palate definitely is geared towards a wine like this, and cooler vintages in general. I think a cooler vintage captures the allure of older vines in a more expressive fashion as well. But these are all decidedly in my opinion statements.

I remember when the 2011 vintage fist happened; I was in South Carolina, and somehow the word leaked out into the Southeast that 2011 was bad, bad, bad. Cold and wet. Stay away from them. I had a customer tell me once that “his friend told him NOT to buy ANY Pinot Noir from Oregon from the 2011 vintage.” I don’t quite recall how I responded to that one.

Sometimes I wonder where these things start.

What I can say is that 2011’s really stand out to me. There’s something extremely vervey and alive about these wines. A tingly kind of energy that guides you to the delicate power that is Pinot Noir. That is what continues to excite me about the vintage. And with that, I’ll get off the soapbox and detail this particular one! 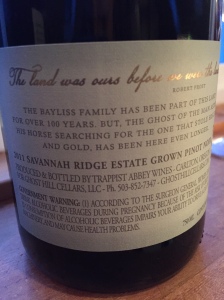 A brickish red color, the wine is in a nice evolutionary phase. Immediately upon opening, the nose has a brief flamboyant moment: bright raspberry and red cherry. It settles down a bit, relaxing into its herbal undertones. Asian five spice, sage, fennel, lavender and a resounding note of deeper black cherry abound. The finish is a lively smack of tart pomegranate. That’s the other thing I love about a leaner vintage; the acid lift makes me want to smack my tongue against the roof of my mouth. Satisfying.

I bought this bottle at the winery. Confession: I don’t recall what I paid for it. I do think the bottle price is $42, but I know they had a discount on the 11. If you’re in the area for Thanksgiving, go check them out before they close for the winter. Your pants will be charmed off, and you’ll leave feeling like you have experienced a special part of the area’s history. 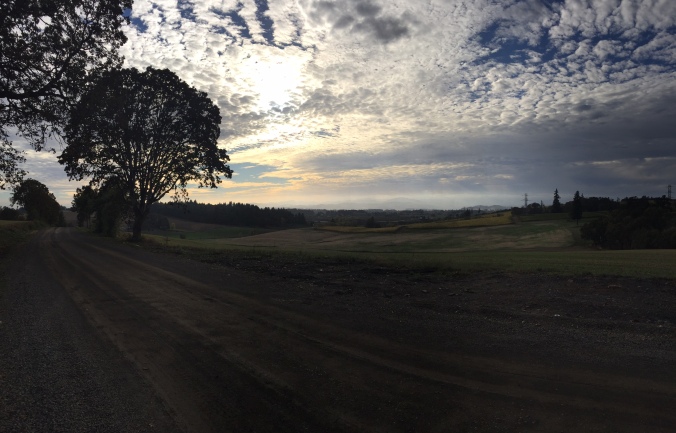