Today was a serendipitous day! I went to visit my friend Erin, the tasting room manager at the new Winderlea/Brittan tasting room in McMinnville. Which you should go to, by the way. Its a cool little spot, and there’s Chrysalis Coffee and the Dominio IV tasting room nearby too!

I was an early bird, getting there right at 11 after a morning spent getting new brake pads on my car (FUN.) Really, who tastes wine at 11am? Well, me. But who should arrive right as I got there but Robert Brittan! So I got to chat with him a little bit about wine, a little bit about life and a lot about his love for Syrah. I actually first met Robert at Pinot Camp in 2013, when I had no idea that anyone grew Syrah in the Willamette Valley proper. After returning home, his Syrah was one of the wines that stuck with me the most. Mostly because its good, but also because it shattered my preconceived mold of what Syrah could be in the Pacific Northwest. 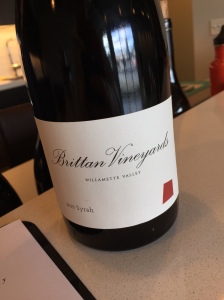 So Robert isn’t the only one making Syrah in the Valley- Adelsheim makes a bit, a winery I am not familiar with called Biggio Hamina Cellars sources some from the Deux Vert Vineyard in Yamhill-Carlton (interestingly, that is where some of the Tempranillo that I wrote about yesterday comes from), and a handful of others. Most other Syrah that is bottled by Willamette Valley wineries is sourced from either Southern Oregon or the Columbia Valley/Walla Walla.

Robert shared many a story- most of which I can’t really do justice to attempting to re-tell. But he did share that when he first planted Syrah here in the McMinnville AVA, his wife (Ellen, who knows a thing or two about wine herself) laughed at him. It’ll never get ripe, she said. She had a nickname for the acre of Syrah that he first planted, I think it was “Hail Mary.” I could be wrong. In any case, Robert had a wild hair about Syrah, and he found the right site. And made the wine. His spot in the McMinnville AVA benefits from a bit of the Van Duzer Corridor- ie, a stream of cool wind that makes its way from the ocean through coastal range to find the grapes and cool them off at night. To maintain spice, you gotta get cool at night, so I’ve learned.

I’m fairly certain that the Brittan Syrahs I’ve had are the darkest colored wines in Oregon. Its a little mind-boggling and awesome at the same time. The one I had today in the tasting room is the 2010 vintage, a popular vintage for hardcore Oregon nerds.

So when I said this wine was dark, I wasn’t lyin’. Incredibly deeply colored with a flavor intensity to match, this wine has an incredibly savory quality that I find fascinating. Dark fruit opens the wine; blackberry and black plum, and a deep vein of white and pink peppercorn follow. The texture is dense, and the steadfastness potency never fades. Like a good Northern Rhone, this wine tastes distinctly of meat. To steal a word from The Wine Advocate, in an almost “carnal” fashion. But here’s the kicker; after a few minutes in the glass, the wine shows off some fun and chic notes of cured olives, violet, sage, bay leaf and cassis. For a hulk of a wine, its alcohol content is shockingly low at around 13%, I believe. The picture I took conveniently cut it off, but I remember talking about it. It is worth noting that this wine got 90 Points from The Wine Advocate.

Since I’m spoiled and lucky, I also previewed the 2013 and 2014 vintages of Robert’s Syrah. The ’13 will go to bottle soon, and its a stunner. The ’14 is still undergoing Malolactic fermentation, so it was a little unruly; but the bones are there, and it will be interesting to see how it turns out.

There’s wine in those.

Only about 2/3 of the way through writing this did I realize I left the tasting notes I wrote at the tasting room this morning. So all this was free-form, but the wine is memorable enough that I didn’t need them. Right now the Brittan-Winderlea tasting room is open Friday-Saturday-Sunday, so get on by!

This bottle is available for purchase for $40.