Its high time we dove head first into the deep end of the pool, ladies n’ gents. And in this circumstance, I mean: 2013 Oregon Pinot Noirs! This is the first of a series I’d like to do that focuses on the 2013 vintage for Oregon Pinot. How many will be in the series? Meh. I don’t know yet. Probably quite a few. There are a lot of things that interest me about 2013, mainly how it will be perceived by “the masses” following a very popular and publicized vintage like 2012. I’m on a mission to ensure 2013 doesn’t get turned into a “throw away” year. Well maybe not ensure, as my platform isn’t the loudest, but at the very least- I’m starting to observe what others are saying and throw my two cents in whenever I can. So here we go! 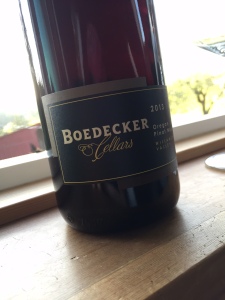 Not the first 2013 I’ve tasted, but the first I’ve chosen is the 2013 Boedecker Cellars Pinot Noir, Willamette Valley. What’s today? Wednesday. What is this? A great Wednesday wine. A somewhat unfair term which I have mixed feelings about, but it does get to the point. The pricetag on this little guy is but $20. Which as I sit here with the wine, does seem like a meager sum for this bottle. I bought it at the winery a few weeks ago, during an epically long day in Portland that involved a lot of wine tasting and Ikea (what better time to go to Ikea than after you’ve had some wine?) 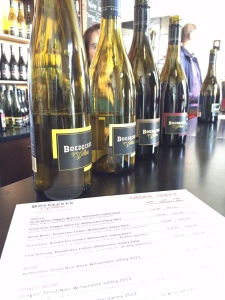 They were having a club pickup day- SCORE.

I really enjoyed my visit to Boedecker. Very down to earth, low-key, non-pretentious people who racked up quite a few impressive scores in 2012. This wine has actually bloomed beautifully in the 30 minutes that I’ve had it open. Youthful (duh) and lively, it has a buoyant nose of black cherry, raspberry, rhubarb jam and a teeny undertone of cherry cola. The palate is fresh and lean- rose petal, potpourri and a tang of orange zest. A nice easy sipper, but with enough variation that it doesn’t just sing one note. 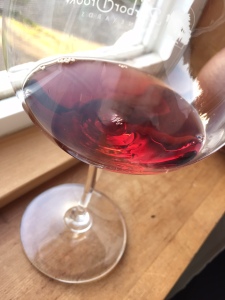 Nicely balanced acid, pretty fruit, brightly colored- all in all a very inviting glass of vino. This is my idea of a no-brainer restaurant glass pour, or like I said earlier- a Wednesday wine. And when you find a perfect Wednesday wine- it kind of rules.

This is what people did over 2012 Oregon Pinot Noir: 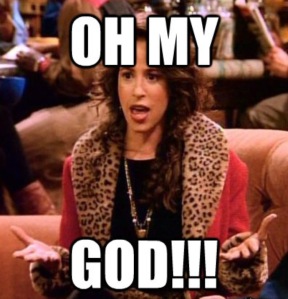 Will they do that over 2013? Only time will tell. Those of us who drink a lot of Oregon Pinot might. Those that prefer California Pinot might not. 2013 is not going to smack you upside the head with burly fruit. But what they will do, in my opinion, is charm you and wile their way around your heart. Thus far, that is what they’ve done for me. I’d like that to be the case for everyone. So stay tuned, and we’ll do this more often! What say you?